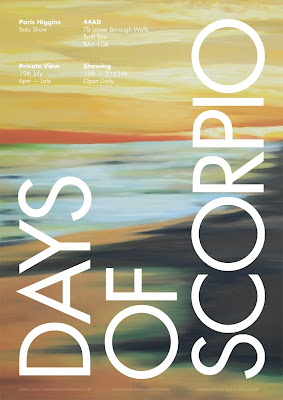 'Days of Scorpio' is a solo exhibition by Paris Higgins from G9 at 44AD in Bath until 21st July.

Days of Scorpio brings together a selection of recent work by Higgins, which present a polarity between two conceptual and stylistic approaches to painting. Despite a clear divergence, both approaches are grounded in the same theoretical standpoint: a critical engagement with painterly discourse in relation to contemporary visual culture, seeking to deal specifically with notions of signification and aesthetic language.

The paintings are indirectly tied to cinematic and musical culture through the mediated use of certain visual phenomena that can be associated with both. Some reformat that which they draw upon, abstracting, not literally, but on the level of interpretation. And in doing so signification becomes detached, established visual associations, which are bound up in both the recollection and comprehension of a wider cultural sphere are placed in a state of antagonism.

Others follow a process of aesthetic simulation, drawing on relatable themes in an attempt to expand on an existing cycle of mimicry, which although specific (associated directly with the photography of William Eggleston in relation to his influence on cinematography), stands as an example among many.

What can be said of all the work on show is that the painting process itself not only informs the production of these displaced visual products, but is responsible for building a visual language that is significantly separate from the sources it initially draws upon. The paintings thrive because of this; they facilitate fantasy, not through illusion but through their ability to allude with a potency, which is quite inconspicuous. The paintings don’t operate by proxy; they manufacture their own meaning, their own coherence, and in doing so become inherently ambivalent. Here lies their irony; as such a process is laden in contradiction.

This aspect of the work indirectly points to a defining characteristic of contemporary visual culture: incongruity as a consequence of mass signification, and in this, the seaming inevitability of a variable yet structured understanding informed and dictated by individual identity.